Back Into The Fold 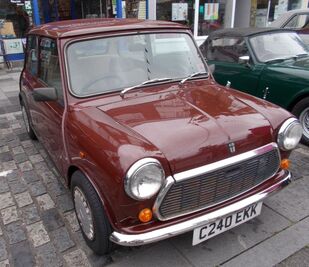 For as long as I can remember, I have had a fascination with classic cars.  I would trawl through my elder brothers car magazines thinking ‘One day I’ll own one’.  At the time, several decades ago, my favourite was the Austin A35 and I still love the look of them today.

Of course, my current little beauty was still in production back then, but like many people, I had a great fondness for it and always have had.  It’s iconic, innovative, small, nippy and a joy to drive.  It is of course, the Austin Mini.
Knowing of my fondness of Classic Cars, my husband sent me a text one day last year which just consisted of a picture of a little brown mini, all on its own looking all forlorn on a garage forecourt just round the corner from our business in Ivybridge.  Intrigued, I set off to take a look (the colour didn’t put me off).  There she was.  Dull paintwork, a bit tired and grubby inside, rust here and there.  But all in all, an honest looking 32 year old car that had lived.  And that appealed to me.  A useable classic.  One that could be driven daily if desired and not kept in an air conditioned garage, mainly because we only have a drive at our cottage in Horrabridge.  And one that could be improved as and when finances and time allowed.

I arranged a test drive at a time suitable for hubby to come along as well.  Luckily a sunny Saturday so we could give her a proper going over.  The woman from the garage walked to the car with us and explained that was her grandfathers’ car, and it had been parked up for some time but they had serviced it and it was good to go.  After several attempts trying all the keys to open her up, I finally got behind the wheel, pulled out the choke and turned the key.  She burst into life first time.  The sound of the little 998cc motor was unmistakable.  The combined ‘old car smell’ of oil and petrol fumes brought back childhood memories.  Windows down, we set off on our inaugural test drive.  Little juddery to start off, but once on the road, she purred.  I had to keep checking the speedo though as it felt and sounded like we were doing 70.  In reality, 35 – 40 mph.  After popping her back on the forecourt I told them that I would go away and have a think.  Several days later, I don’t like to rush things, I agreed to buy her.  Once the paperwork was sorted and they had informed the DVLA that at some point the previous owner had changed her from and automatic to a manual, I wandered over to pick her up and drove her over to our shop so I could transfer the money over for her.  It was only then that I found out that she had already been paid for by my husband as a birthday present for my upcoming 50th .A very naughty and generous gift I’m sure you will agree.

Over a year on and we recently found out that my little brown Mini, now named ‘Mini the Poo’, had previously been in the DVCC.  Her previous owner was the late former founder member John Friend.  And we purchased her from Friends garage in Ivybridge.  It’s great to know that she is back in the club where she belongs, and I will endeavour to bring her to as many meets as I can.  The plan is to improve her over time either by having the rusty areas sorted or replacing panels.  I would like to keep her as original as possible, but I’m sure you know that sometimes, new bits are inevitable. 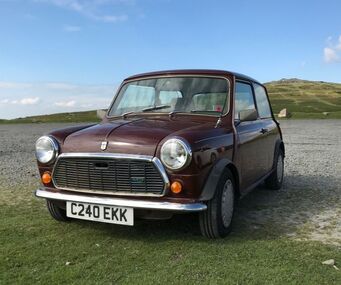