A Boy's Day Out
By Mike Oakins

(First Published in the Magnetozine July/August 2019
To run any form of Motor Sport you need Marshalls. To keep Amateur Motor Sport as affordable as possible you need most of the Marshalls to be volunteers. The Motor Cycling Club, who have run three Long Distance Regularity Trials each year for over 100 years, are no different from other Clubs in this respect. For over 10 years I took part, as a competitor, in these events. They are open to cars, motor cycles and three wheelers, last 24 hours, cover 300+ miles on relatively minor roads and include 12 off-road hills and at least two timed driving tests. I decided 3 years ago I was getting too old to compete (driving through the night in January in below freezing conditions in an open sports car and continuing to drive until tea time the next day, was no longer an absolute pleasure). The spirit was still willing, but the body certainly was not and so to ‘keep my hand in’ I decided to marshal.
Each section on an MCC Trial requires four, five or more marshals, so why not form a team and be responsible for a whole section. I put the word out in the DVCC a year or two ago and we have provided a section team ever since for the two trials which take place in the West Country. This year’s Lands End Trial took place over the Easter weekend and we helped run two sections, hence the Boy’s Day Out of the title.  An early start, I picked up Chris Tullett in Yealmpton at 06.45 and then Gerald Lobb at 07.00 in Plympton, across the bridge into Cornwall heading for breakfast at the Wilsey Down Hotel, a few miles North West of Launceston, where we met up with Chris Bowden, the fourth member of the team. The cattle market at Hallworthy, which acts as the car park, backs on to the Hotel which provides a market cafe suitable for 300 to 400 hungry competitors and officials to have a Full English over a period of six hours.     We joined the queue and enjoyed a substantial breakfast but not quite in the surroundings provided by the Dartmoor Lodge. A quick briefing followed and by 09.00 we were on our way again, all packed in my Land Rover, together with our kit, to find our section, way out in the countryside about five miles south of the Royal Cornwall Showground at Wadebridge. Getting there on time relied on Chris T’s skills with a one inch Ordinance Map.
A brief explanation of vehicle classification in the trial was next. The main trial follows a common route but the competitors (cars, bikes and three wheelers, about 250 in all) are divided into a dozen classes, so that they are judged against machines of a similar competitiveness. Some 15 years ago, Class O was introduced to run on a slightly different route and with slightly less car-breaking off-road sections. This now attracts 50 to 60 competitors and, finally, in the last two years a new Classic Class has been  started which is run entirely on tarmac roads, with fewer tests, but much more closely timed so that more than 10 minutes out loses you your medal. On this occasion this class attracted 17 entrants.
We had been asked to marshal a Special Test, which every single competitor had to undertake. It involved a simple driving /manoeuvring test against the clock (see diagram below). It appears quite simple but remember everyone has driven overnight and had very little sleep in the previous 18 hours. Our test took place in Hustyns Wood on a loose surfaced forest track. 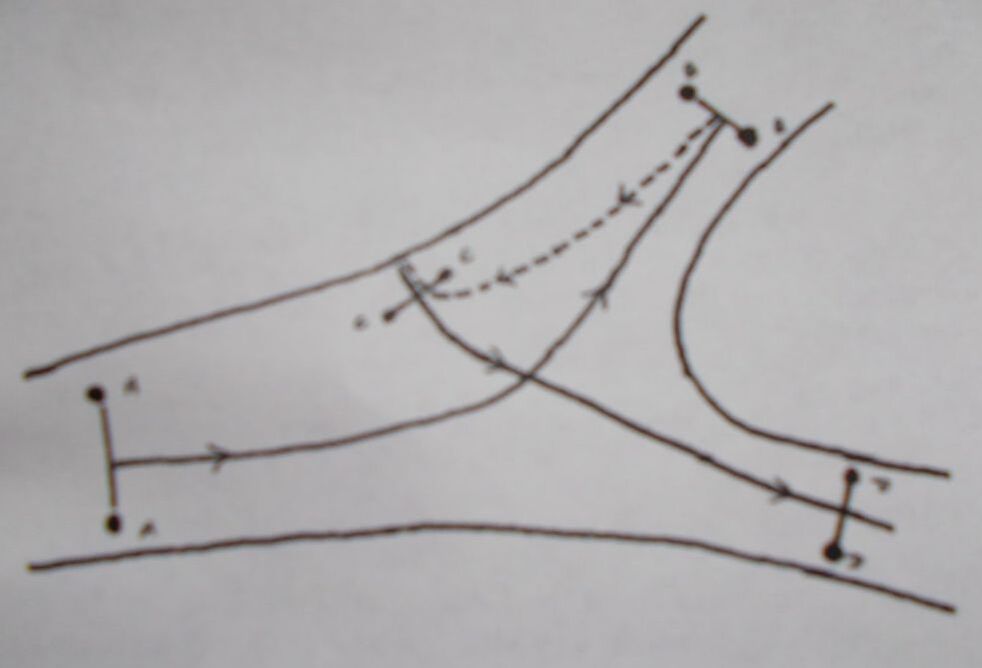 These instructions and the diagram both appeared in the Road Book:
‘Start with front wheels on line A. At the drop of the flag, drive forward to cross line B with all four wheels. Reverse to cross line C with all four wheels and then forward to stop astride line D. Timing from drop of the flag to stopping astride line D.’
Gerald spent some time as starter, dropping the flag and by next morning was complaining of a stiff shoulder! As the whole Trial did this Test, we had a continuous flow of bikes and cars for about six hours. Our payment for these hours of toil was a tasty, warm Cornish Pasty (nearly as good as Devon) delivered about lunch time courtesy of the MCC.
Chris Tullett and I were called away, early on, to help with one of the Classic Sections. This was the original Hustyn’s Hill used back in the 30’s when it was unsurfaced. Now, as it is surfaced, it is used in the Classic Trial but it is still 28% or 1: 3½ in old money. The pictures on the next page show a Sunbeam, a TR and a GN having reached the top.
The other pictures show an interesting selection of cars on the special test. Not all the cars were as much to our classic taste. There were many everyday road cars some more modified than others, a selection of out and out trials specials and a whole range of bikes from modern trail to older British road varieties.
The weather was perfect; the company was good, the interest on the section almost continuous and a pasty for lunch followed by a quiet drive home heading east from the sunset. What more could four blokes want for a good day out?
P.S. If you are ever approached to marshal, give it a go. You will find it is very worthwhile.
Mike Oakins 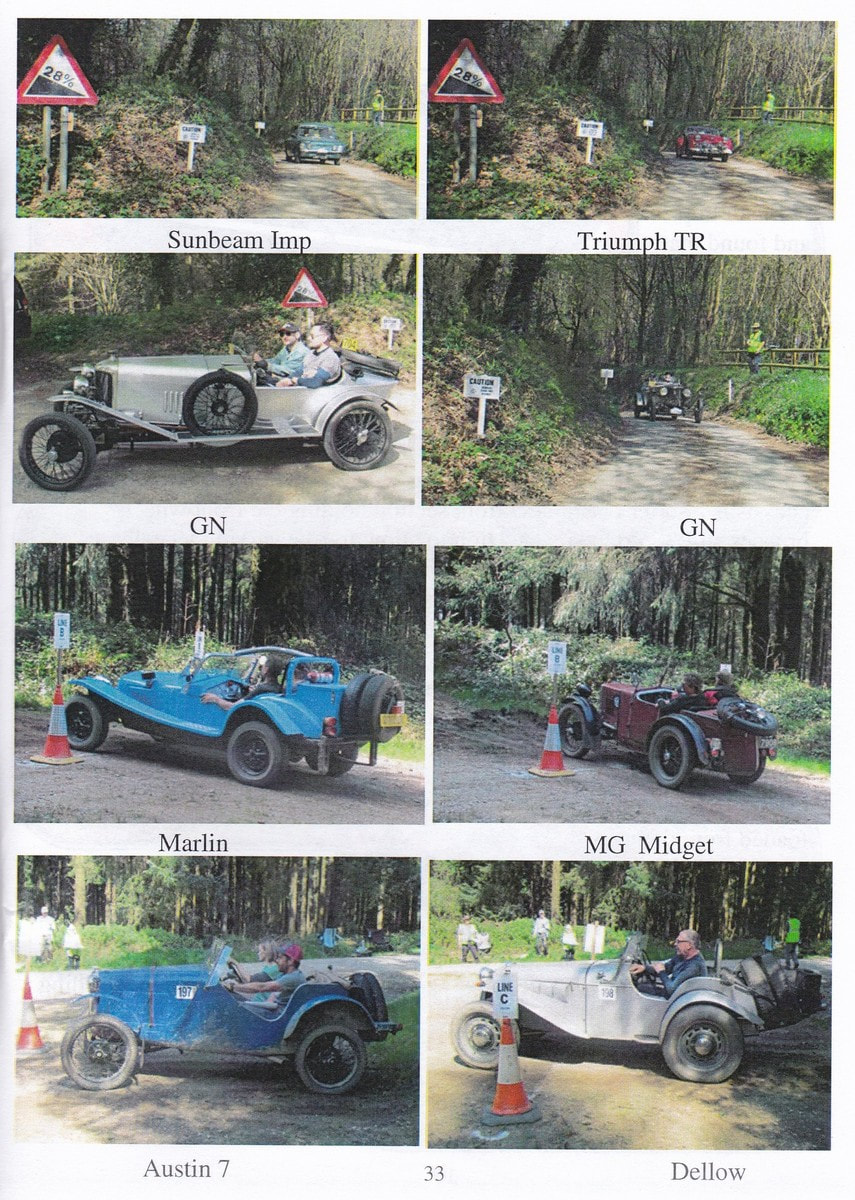