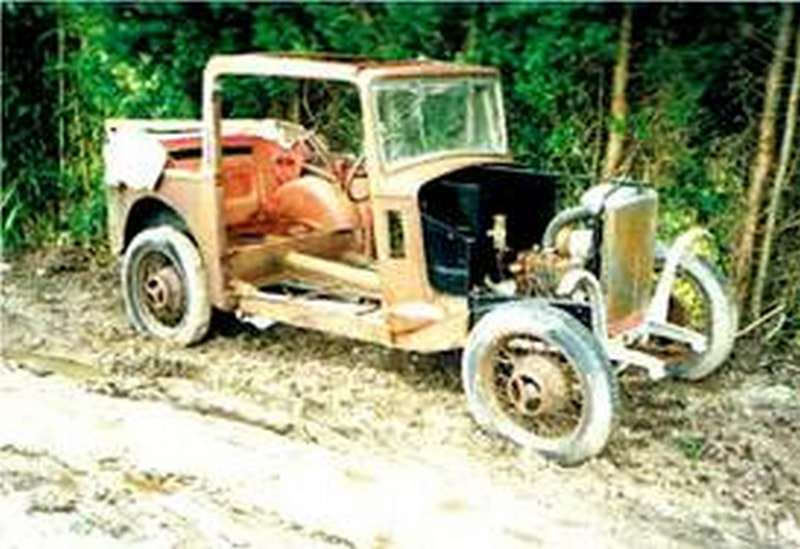 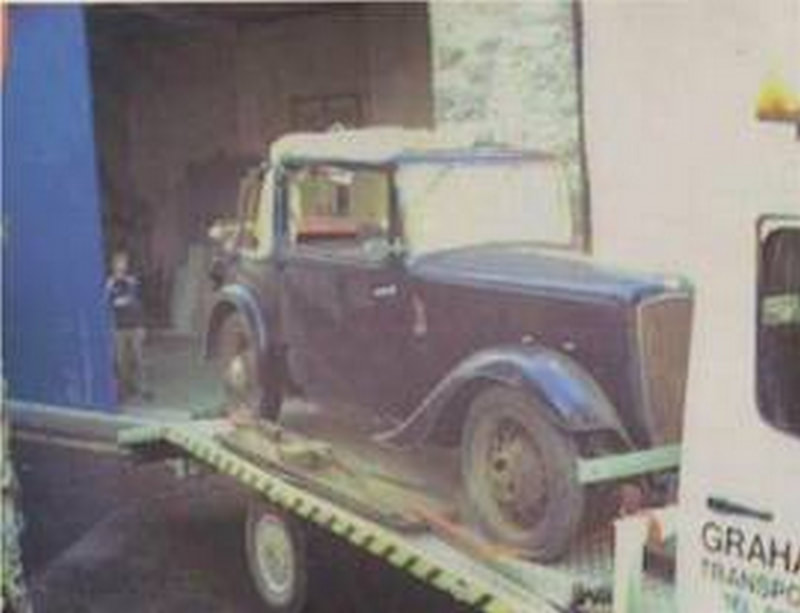 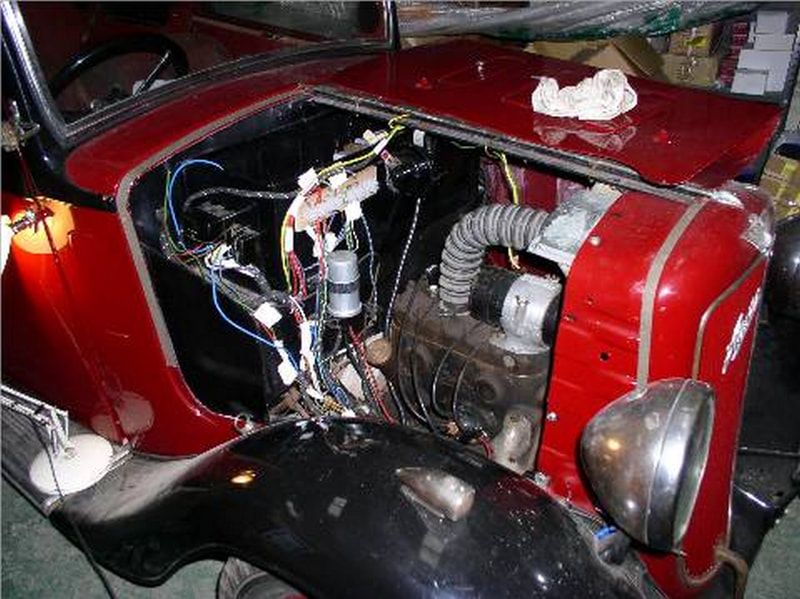 Anyway, in early January the time came to press the magic button. But not before some time and effort in trying to locate ‘top dead centre’ to set the ignition. Various books suggested various methods. The Austin 10 manual made it sound easy – just look at the flywheel and the marks are there. But to see that you need to be a contortion and I’m not! In practice the best way was to remove all the plugs but number 1 and then turn the engine to feel when it went into a compression stroke. Then set the distributor by guesswork. After a little persuasion it fired up. Initial impression is that the dealers story that the engine had been overhauled might even be true as it runs very sweetly. A little further adjustment by physically moving the distributor before tightening it up should have it set correctly. Now the current job is refitting the body panels having had them resprayed into original black and maroon. That was a bit of fun – pushing the car the wrong way up a one way street to get it to the car body shop and then back down again a week or two later after the job had been done. It’s a bit of a sweat making sure the beautifully restored panels don’t get scratched but I’m managing! But I have to keep wife, Jill, out of the spare bedroom in case she finds the door being rebuilt on the double bed. With the panels back on I can start to get the wiring to the lights in place. Then it’s off to Ivybridge to have a new hood made and fitted and visit the local garage for an MOT!

Well, the above was written some 10 years ago. The car duly made it back on the road in 2004. Since then it has been running beautifully and made many appearances at shows and at the South Devon Railway. It’s also performed important duties for the weddings of both my offspring, being driven by my Son to take his new bride to the reception and by myself to take my daughter to the Church. Happy times! 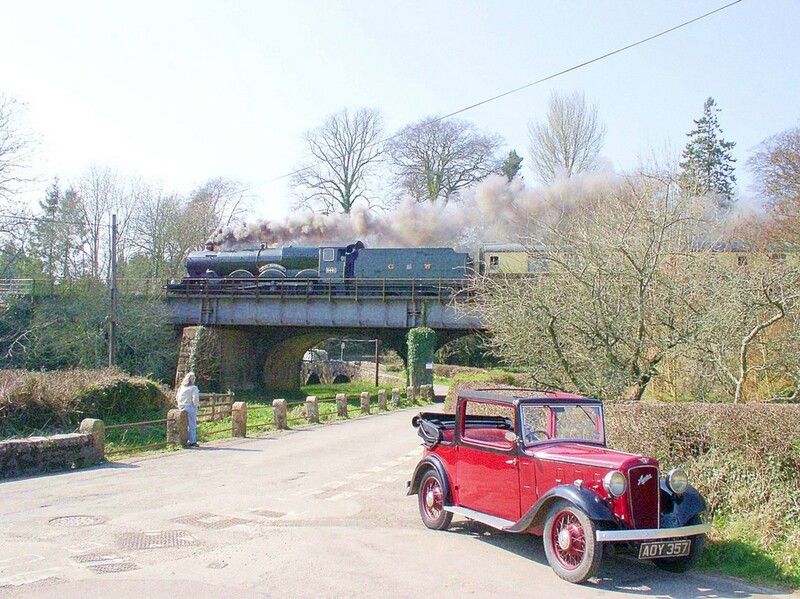 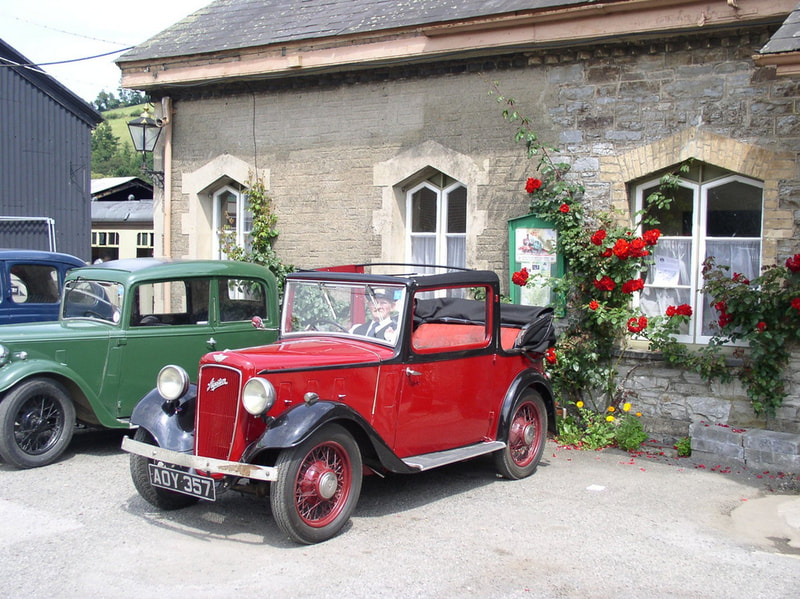 Update May 2019 by Chris Elliott

Since the article and the update were written the car has moved from Richard’s (my Dad) care to mine.  He was slimming down his collection and I asked if he might give it to me rather than it leave the family, since it had good memories and is a lovely car for a sunny day.  Fortunately Dad’s work on the car has stood the test of time well, and while the interior is not exactly perfectly original, it is an honest car and I don’t worry about my children and their grubby footprints when they are playing in it!  It regularly does the school run in the summer, as well as some longer runs and some local shows.  I successfully took 5 people up Widecombe hill at the weekend, and didn’t even need 1st gear, and more importantly managed to descend safely too!

I have not had to do a great deal of work on the car, save from iron out some strange behaviour with valves.  At some point it appears something foreign went through the fuel system and resulted in a coating of sticky black gunge on the valve stems which meant that when the engine was turned over fast the valves were effectively staying open because they were moving a bit slowly, but if you tried to check the positions of the valves at given points, they seemed correct, and once it eventually started on one or two cylinders and warmed up it would work correctly.  Needless to say, it was obvious once the head was off, and once I had learnt the joy of getting the collets back on the valve stems without firing them across the garage floor, the car behaved much better and starts reliably.  So 15 years after Dad got it back on the road, it continues to do sterling service.