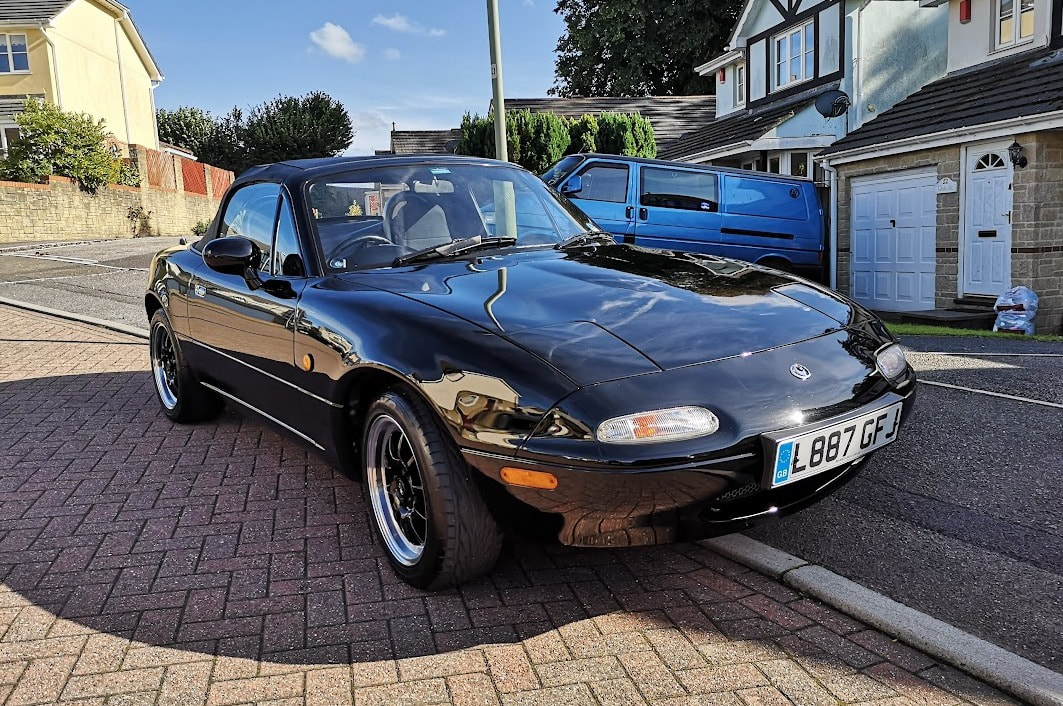 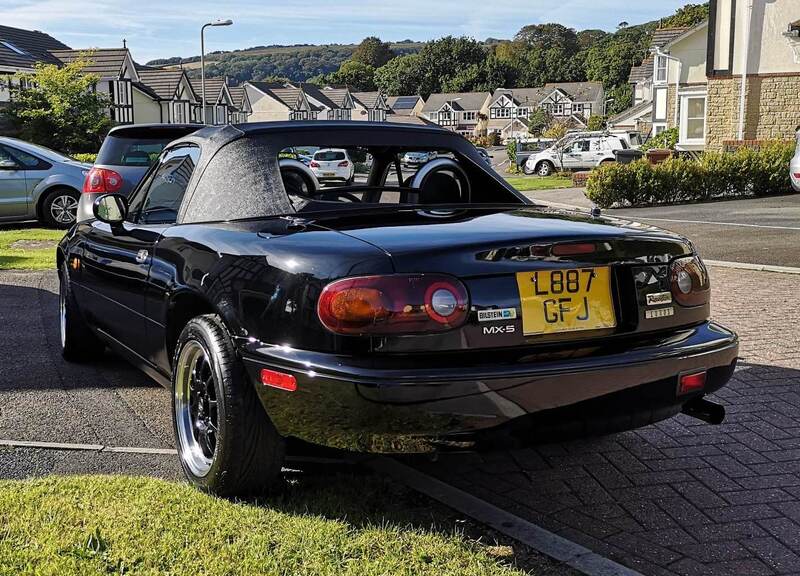 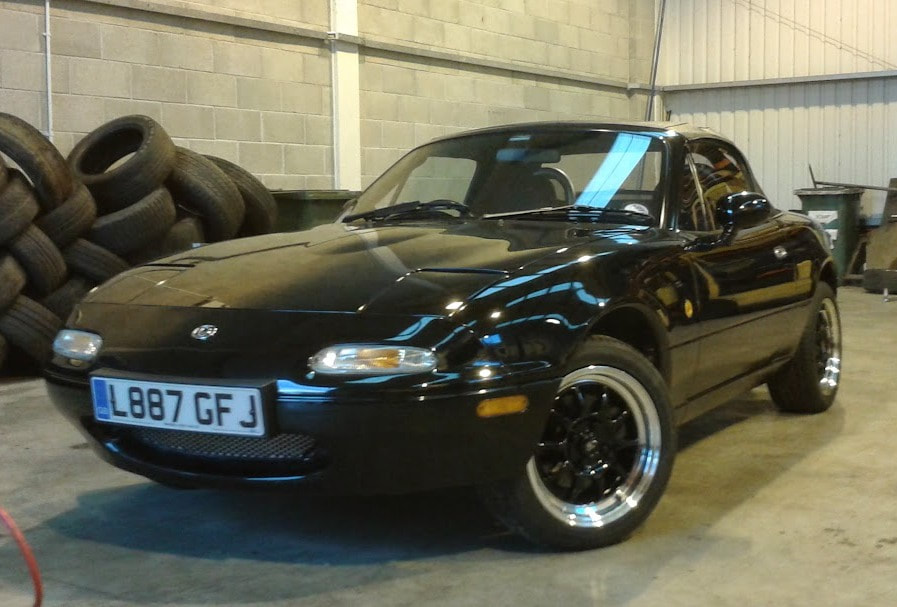 I first bought my 1993 Mazda Eunos (grey import Mx5) in February 2005 after a disastrous encounter with an MGB roadster. The guy restoring the B disappeared along with my car and £2600 of my money. This obviously left a sour taste in my mouth so I thought I would go for the more modern Japanese take on a 2 seater sports car. I was the first UK owner, buying it from the Southwest Lotus Centre in Lifton. The car wears an Exeter registration L887 GFJ and is affectionately known as Geof. It is one of the very first 1800cc models being built in November 1993. The Japanese import models came with lots of extras as standard that didn't come on the UK models. These include a limited slip diff, electric windows, electric door mirrors, power steering and air con. This is also a special edition model with strut brace, Nardi steering wheel and Nardi gear knob. And, of course, they have the benefit of having lived on salt free roads for the first years of their lives.  This one being a Limited Edition also came with Bilstein suspension, says member Brian Marshall. 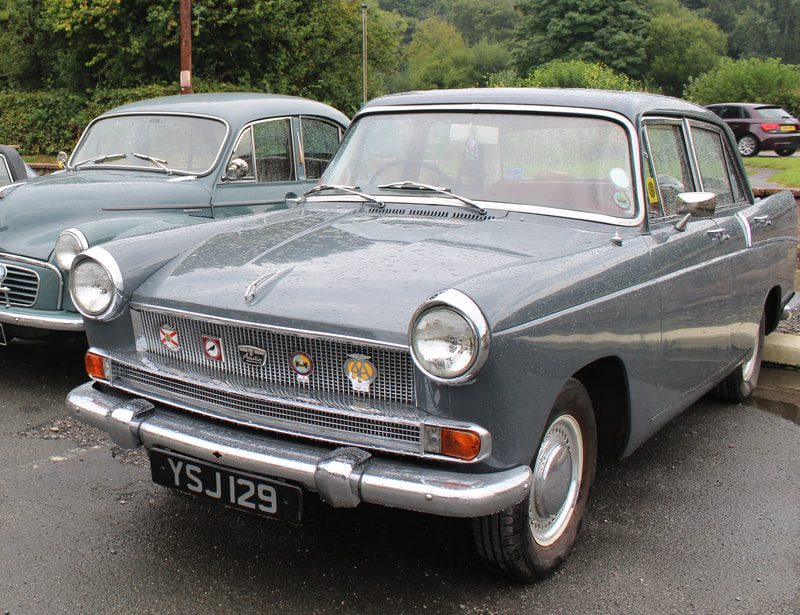 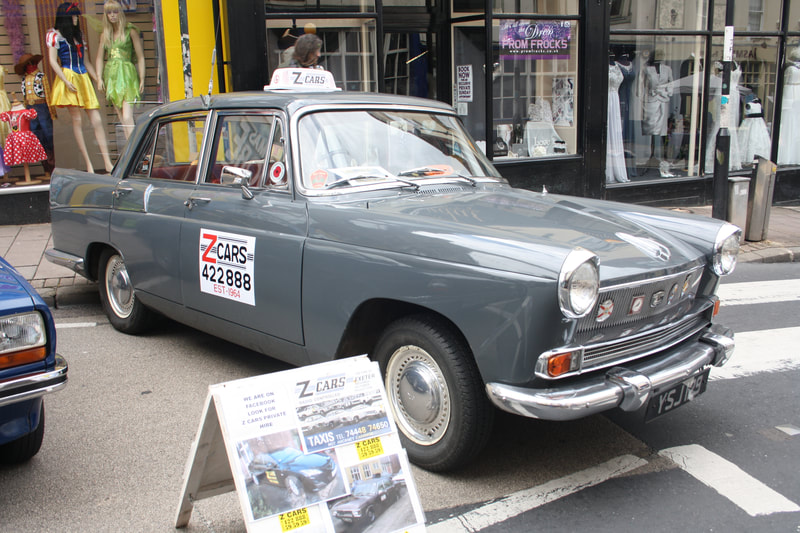 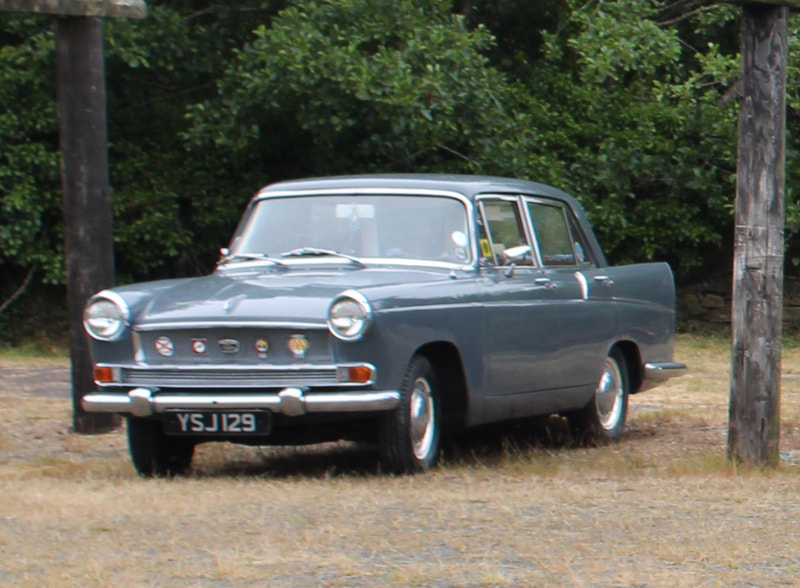 This very early Austin A55 Cambridge was built in the first month of production and is a very rare early example with different body features that were soon altered during production.  This model has the smaller 1500 engine, although you wouldn't know it, and also larger rear fins that were altered for the A60 model which was produced with the 1600 engine and smaller fins.  The car can be seen at many local events during the show season and often presented as a period Z Cars Taxi as a tribute to the Exeter Taxi firm that ran from 1964 until 2020.   Owned by member Tony Collier. 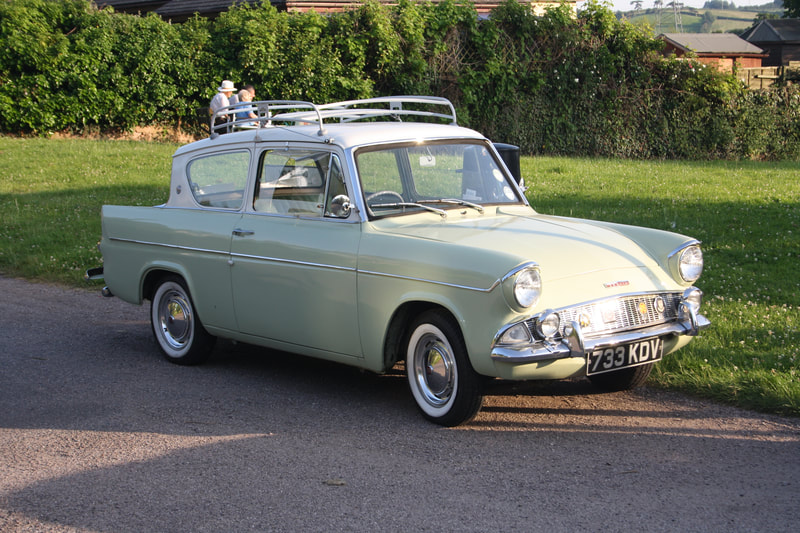 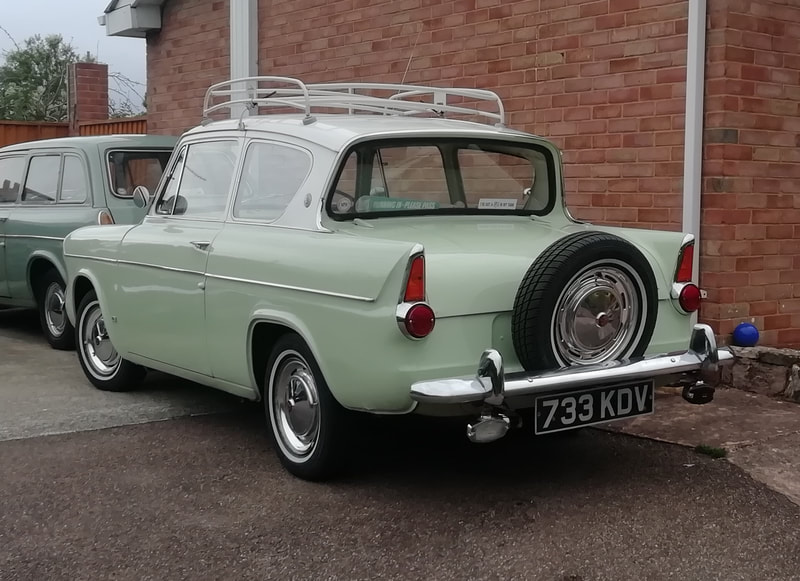 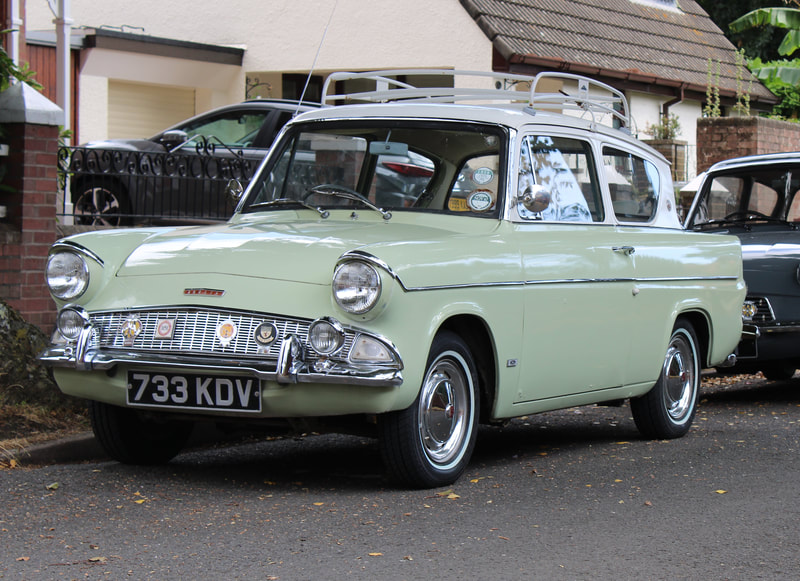 This 1962 Ford Anglia 105E Deluxe has been in the current owners possession since 1986 and was also his first car.  Over the years all the correct period Ford extras that were available at the time, have been fitted.  The car is running the original 997cc engine that has now covered over 100,000 miles and never been rebuilt says owner Aubone Braddon.
This Daimler 15 Mulliner bodied 4 light Sports Saloon is owned by members David & Jackie Woolcock. 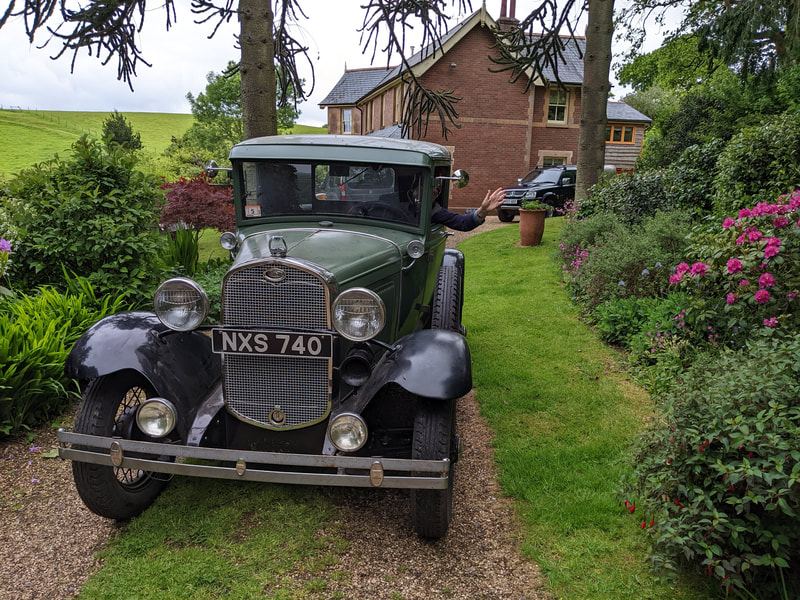 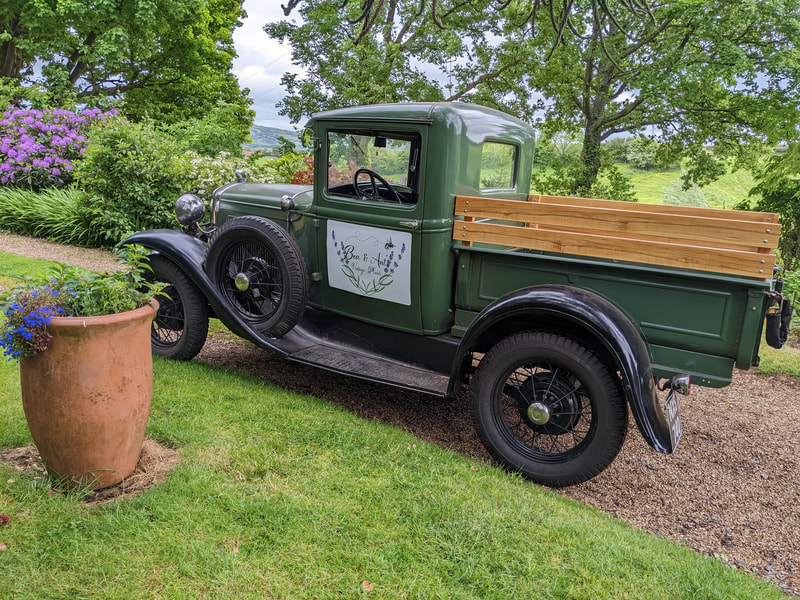 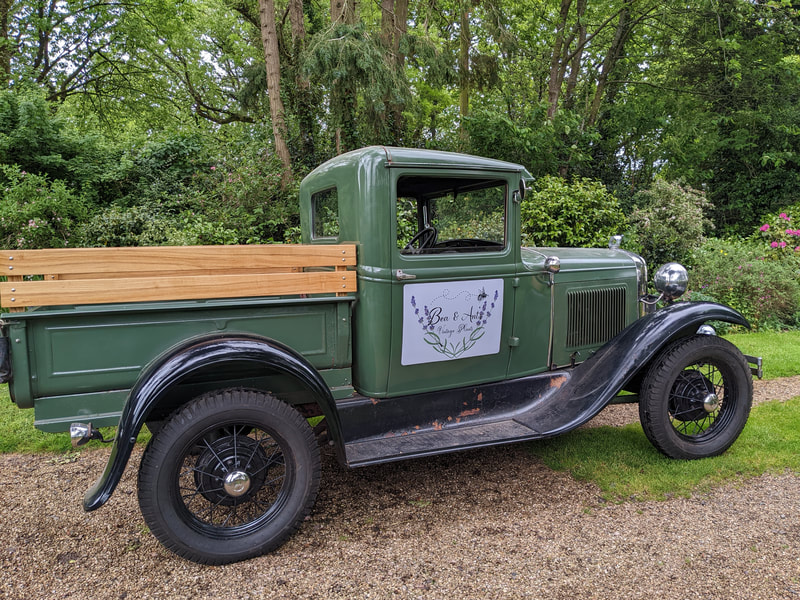 This is a 1931 Ford Model A pickup truck, ex USA so LHD, but pretty original in all aspects, still 6V and 3.3L engine.  "Just got it roadworthy", says owner Anthony Barnett.
The car is an MG TD. it was exported to South Africa in 1950 as a CKD car and assembled by, Motor Assemblies Durban, thus making it a MAD TD.
It was first registered in Natal in 1951 when it’s colour was ivory white. Later it went to Zambia then The Seychelles. By then it’s colour was blue. From there it was repatriated to the U.K. It then became what is described in its history file as “a poor shade of British Racing Green.” It is now a different shade of BRG,  BMC Connaught Green.
It has been registered in 4 countries, had 4 different colours but It still has its original engine!
I bought it in 2019 and I am the 7th owner.
The car goes well and with a 5 speed gearbox it is possible, (just) to exceed the national speed limit!.
Lionel Uden
LIEGE R SPECIAL
This is my Special (a term I prefer to Kit Car) called ‘Julia’, which I built, as a retirement project, over 20 years ago. I wanted a little open sports car as a run about and saw an article about the Liege, went and tried the demonstrator and decided that it was for me. I placed an order and then looked round for donor vehicles. The kit is built round the running gear of small Reliants, mostly the Robin but it does need the rack and pinion steering of the Kitten to achieve four wheels.
I bought two scrap Reliants and dismantled them, retaining and refurbishing the bits I needed and discarding the rest. The kit consisted of an A-frame chassis with all new suspension on which the Reliant engine and running gear were bolted to produce a rolling chassis and then a fibre glass body tub was dropped on, wings and bonnet added and the whole lot sprayed. Sounds easy but it took two and a half years to get it on the road.
The Liege kit was made in Evesham, in spite of being named after the Belgium City (that’s another story), and was designed as a small general purpose sports car in the 1950s style. Only about 60 were made and two have found their way to our club.
Liege cars have achieved some success in amateur motor sport e.g. in Trials, Rallies, Autotests and Racing to name a few. Julia has not led a sheltered life. She has covered nearly 60,000 miles, has rallied as far as Corsica, travelled the length and breadth of the British Isles, including a charity run from Lands End to John O’Groats, several trips to the lumpy bits of Wales and even round the T.T. circuit on the Isle of Mann. For over 10 years, she competed in each of the Motor Cycling Club’s three Long Distance Reliability Trials and we only failed to finish once with a duff alternator.
Julia sports a 1976 Devon registration number. This is a new, previously unused number, issued by the DVLA. If you can prove to their satisfaction, that all the mechanical bits are derived from a single vehicle they will issue a number, age related to the donor. She is now semi-retired, with only the occasional off road adventure but still a reasonable amount of road use, due to the age and infirmity of her owner/driver.
Mike Oakins.

After 50 years of coveting one, I finally acquired a Bristol motor car.  Back in the 1960's I was a Bristol Aeroplane Company apprentice, which is what headed my apprentice indentures despite the fact that the Company was then part of the British Aircraft Corporation.  Bristol Cars main factory was still located in those days within the main Aircraft factory Filton site. Every day for 2 years I commuted to work parking outside the factory gates and walking in through the security barrier and down the internal road known as "Filton Hill".  The second building on the left was Bristol Cars, usually with doors open and all sorts of delectable sights within.  The next building was where I worked, the Acoustics Lab. Thus started my desire for a quality car, but impossibly expensive over all those intervening years.  Fast forward to the present day and following retirement from my own consultancy business I started looking seriously for a Bristol.  Fortunately an ex Bristol senior salesman had recently started a Bristol specialist operation with a prestige classic car restoration unit in Warminster. A visit to their premises revealed a slightly down at heel Bristol 409, exactly the model they were building new back in 1966/7 when I was walking past their open factory doors.  A deal was struck and I became the owner of a mechanically very sound car with just a few bodywork and trim problems.  None of these deter from the pleasure of the drive, the 5.3litre Chrysler V8 and Torqueflite auto transmission providing surprisingly swift and smooth progress.  We look forward to many pleasurable miles, albeit at 18mpg, on DVCC runs and outings!
Chris Coote 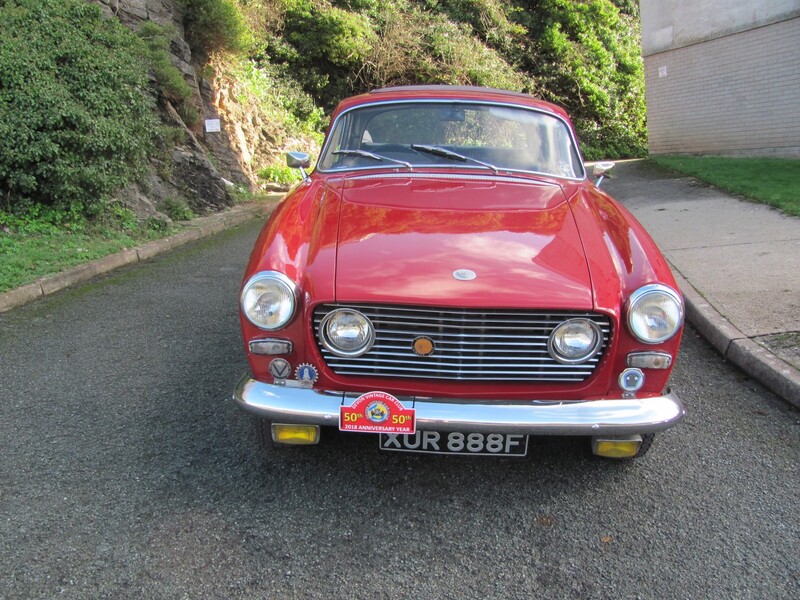 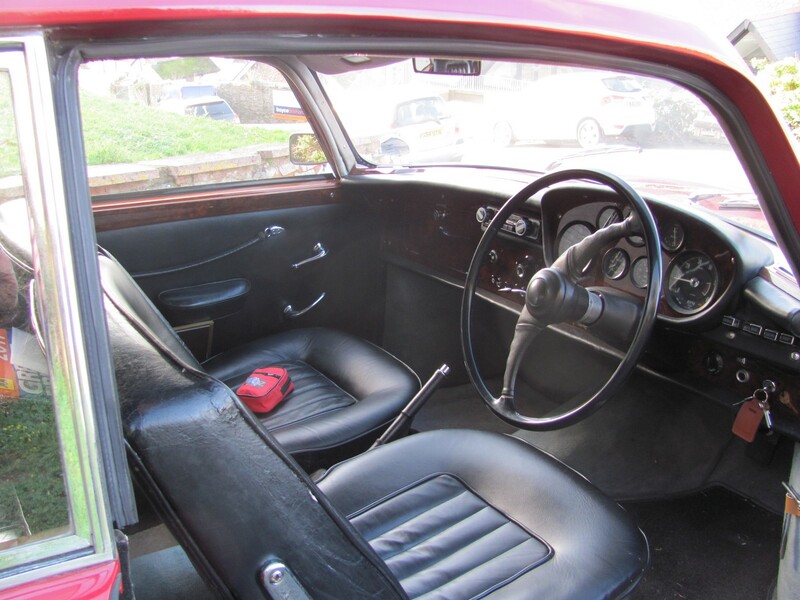 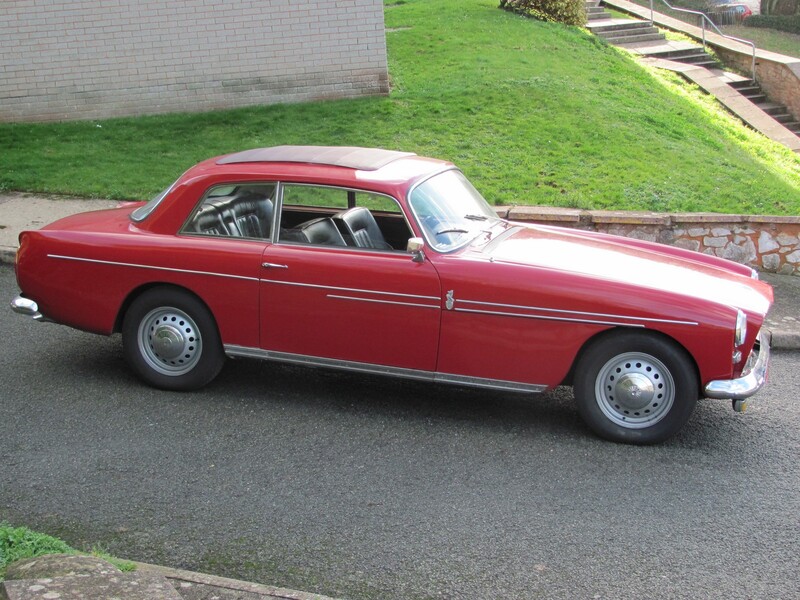 I used to be involved in racing Velocette motorcycles in the 1960's.  My first big bike was a 500cc Velo MSS dating from 1956 for which I paid the princely sum of £36 in May 1965.  This rapidly became modified to full Clubman Venom specification for racing and fast touring.  I always regretted selling it despite the fact that I received more than twice the purchase cost when I sold it to a fellow student.  I hankered after another one and placed an advert for an MSS in the owners’ club magazine. I received a reply from a fellow in Norfolk, some 370 miles away, saying he had an MSS in pieces, was I interested?  Needless to say I borrowed a van and travelled up there and acquired a whole load of parts, not all of which turned out to be Velocette!  Returning home and unloading I hung all the major parts around the walls of my garage. Standing in the centre with notebook in hand I ticked off all the major bits needed to build up a bike.  Using some of my own "old stock" I had more than enough to build a bike, including what looked like a fully rebuilt Venom engine from a well-known expert whom I knew from old racing days.  The build took just 2 months and I was ready to start running in the new engine just before Christmas 2015.  Thus the bike is known as "The Christmas Velo" and that year we had good weather just before the main holiday as evidenced by the picture taken by a friendly bystander at Slapton Sands with me on board.
Chris Coote 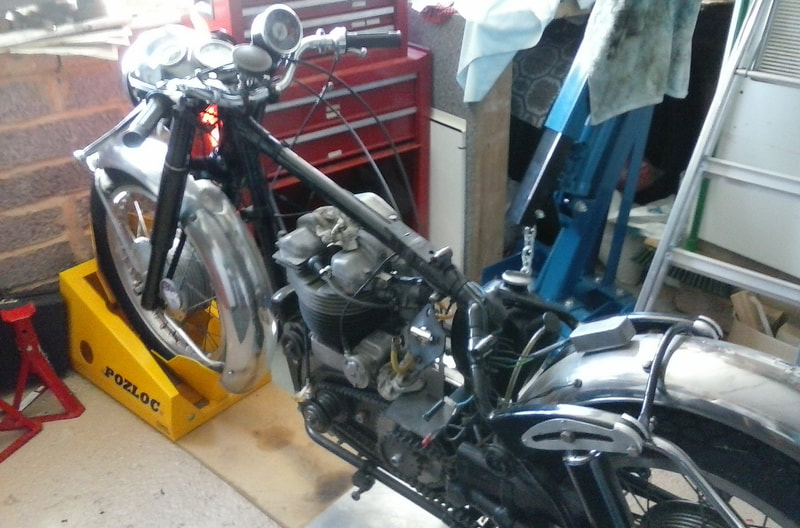 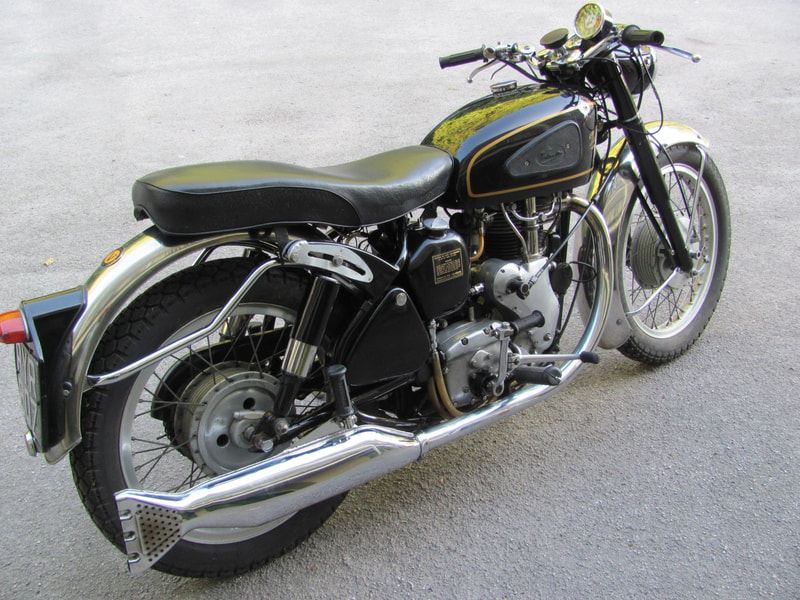 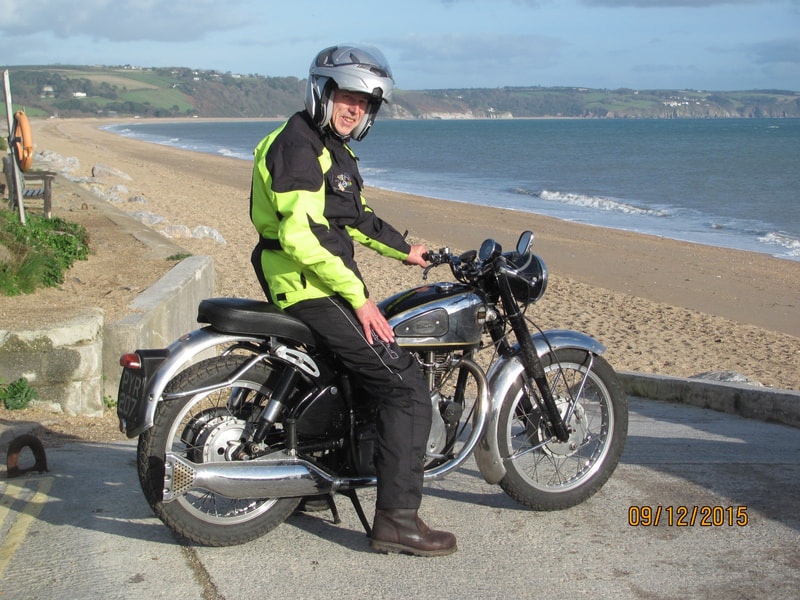