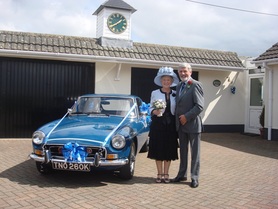 Our story starts in June 1972 when Jennie Ashton bought a brand new blue MGB GT sports car (which she called “Bluebird“) and drove it for 30 years keeping a record of all invoices, MOT Certificates etc., until knee problems forced her to sell the car in 2002. She then moved to Normandy, France with her husband, Noël, who died 2 years later in France. Our story continues with Alan Gill, a widower in Devon, who in 2009  decided to buy a classic sports car and, after much deliberation on which type to buy, he decided on a blue MGB GT, and a 1972 model at that, as one does not pay road tax for that year on a classic car. Having been in aviation all his life, blue was Alan‘s favourite colour and the Blue MG on Ebay certainly caught his attention - but why search Ebay to find a Classic MG and not a Classic Car site he just doesn‘t know! However, having made a successful bid for the MG just seconds before it closed he drove the following day from Devon to Colchester, Essex, with a trailer to pick up the MG. By the time he arrived back in Devon he had driven a gruelling 750 mile round trip - and was totally exhausted !!

The next day Alan started reading the 30 year dossier kept by the original owner from 1972 (Mrs Jennie Ashton), and was SO interested in the contents including the original Bill of Sale that he thought it would be nice to contact the lady concerned to thank her for keeping such an informative record on the MG. In the file was her telephone number which he tried twice but it was now a surgery! Having found an MG Owners Club Membership Card in the file, he telephoned the Club for contact details on Mrs Ashton, but no, the membership had long since expired. Finally, he sent a letter to her home address in Essex which was on the file and, luckily, wrote on the letter and envelope “If you are the new owners of this address and know the whereabouts of Mrs Ashton, please forward this letter on to her” - this was in June 2009 and on 12th June, Jennie (aged 69), who was still living in France and just out of hospital after a knee operation received the letter and photograph of the blue MG via email from the new owners of her old address with whom, luckily, she had kept in touch !

Thinking that perhaps a youngish man had bought the MG, she sent an email to Alan saying “WOW, my baby is still alive and still being driven and loved - thank you for making an old lady very happy !!” The following day she received an email back from Alan (aged 67 – not such a youngish man after all!) and then they corresponded with each other, they exchanged photos, then Alan telephoned Jennie and a short time later said that he would love to come to France to meet her – and so on 17th July 2009 they met in France AND fell in love !! When Jennie saw the blue MG again well and heard its distinctive Vroom! Vroom! she just burst into tears as it was such a magical moment !

On 16th April 2010 Alan proposed marriage to Jennie in France (he was prepared to move to France but the idea of living in beautiful rural Devon really appealed to Jennie), so in June 2010 Jennie sold her French house, moved to Devon on 16th October and on Saturday 16th April 2011, Alan and Jennie were married at Winkleigh Church, Devon driving to the Church, of course, in Bluebird - so the moral of this romantic story is “Buy a Classic MG and (perhaps) your new wife will come with it” !!!

And Jennie even knows how much Alan paid for her !!