COLONEL T.E. LAWRENCE
The wonder man of the Great War
(First published in the Magnetozine March 2019)
We spent a few days in the New Forest in October and decided to visit T.E. Lawrence’s cottage, Clouds Hill. This is near Bovington, the army garrison. Since 1917 Bovington Camp has been the home to the Tank Corps, where Laurence spent his last few years in the army.

Lawrence rented the cottage in 1923, whilst stationed at Bovington and later bought it in 1925. Clouds Hill is a quaint and quirky cottage and the property includes the garage that housed the infamous Brough motorbikes.
Lawrence owned a total of seven Brough Superior bikes, allegedly riding in excess of 300,000 miles. His eighth bike was in fact on order when he died. The Brough was the ‘must have’ bike of its day; they were in production from 1920 to 1940, all to customers specifications, a total of 3048 being built during that period. They were expensive machines, costing £100 to £185 – the equivalent of a year’s wages or the price of a small house in the 1920s. The Broughs ranged from a modest 500cc single to a bizarre 1932 four-cylinder powered by an Austin 7 engine and with twin rear wheels, and a big 1,150cc side-valve twin, often used with sidecars. His pinnacle was the Golden Dream of 1938, a four-cylinder boxer engine with geared cranks turning in opposite directions and shaft drive. Only two were built.

The ultimate version was the Alpine Grand Sport, six of which were sold in 1934 and two in 1935. These were “two of everything” bikes—two carburettors, two oil pumps, and two magnetos—and reputedly were tested at 120 miles per hour before delivery. This is the bike Lawrence had on order when he died.

Lawrence called his SS-100s Boanerges (a biblical name that means “sons of thunder”) and reportedly once outran a Bristol Fighter (which has a top speed of 125 miles per hour) across Salisbury Plain. He often wrote about motorcycling in letters to people like George Bernard Shaw and Lady Astor and regularly corresponded with George Brough about his bike’s performance. “Your present machines are as fast and reliable as express trains and the greatest fun in the world to drive—and I say this after 20 years experience of cycles and cars,” he wrote to Brough in 1926.

Lawrence had an accident riding the Brough on the road between Clouds Hill and Bovington in 1935, whilst avoiding two boys on bicycles.

A stone plaque marks the spot by the roadside. The accident still has conspiracy theorists hinting at government plots and looking for a missing black sedan. He wasn’t wearing a helmet and died of head injuries six days later. The doctor who treated him later campaigned for compulsory helmet use. Lawrence cracked his skull and never recovered from his coma, dying six days later of congestion in his lungs and heart failure.

The infamous bike involved in the accident was GW 2275. Three months after the crash, Lawrence’s younger brother Arnold (two other brothers died in World War I) sold the bike back to George Brough. “George said he was going to keep it in memory of a great man—then turned around and sold it to Cambridge dealers King and Harper, who put it for sale in their window as belonging to Colonel Lawrence.” 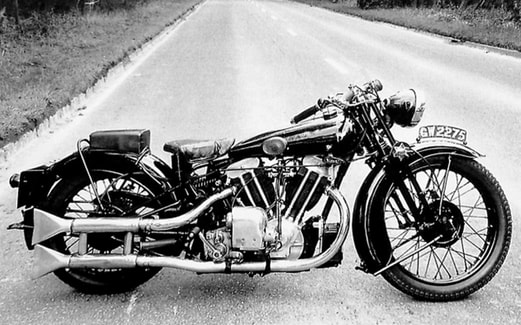 This is the Brough bike owned by Lawrence