Anyway, in early January the time came to press the magic button. But not before some time and effort in trying to locate ‘top dead centre’ to set the ignition. Various books suggested various methods. The Austin 10 manual made it sound easy – just look at the flywheel and the marks are there. But to see that you need to be a contortion and I’m not! In practice the best way was to remove all the plugs but number 1 and then turn the engine to feel when it went into a compression stroke. Then set the distributor by guesswork. After a little persuasion it fired up. Initial impression is that the dealers story that the engine had been overhauled might even be true as it runs very sweetly. A little further adjustment by physically moving the distributor before tightening it up should have it set correctly. Now the current job is refitting the body panels having had them resprayed into original black and maroon. That was a bit of fun – pushing the car the wrong way up a one way street to get it to the car body shop and then back down again a week or two later after the job had been done. It’s a bit of a sweat making sure the beautifully restored panels don’t get scratched but I’m managing! But I have to keep wife, Jill, out of the spare bedroom in case she finds the door being rebuilt on the double bed. With the panels back on I can start to get the wiring to the lights in place. Then its off to Ivybridge to have a new hood made and fitted and visit the local garage for an MOT!

Well, the above was written some 10 years ago. The car duly made it back on the road in 2004. Since then it has been running beautifully and made many appearances at shows and at the South Devon Railway. Its also performed important duties for the weddings of both my offspring, being driven by my Son to take his new bride to the reception and by myself to take my daughter to the Church. Happy times!

I acquired this Velocette 350 MAC (Rigid) about 15 years ago. It was abandoned in a garden, and in a poor condition, rusty frame, rusty wheels, and broken parts, but with a bit of tinkering by an expert (not me) and some fresh petrol it did kick over and run, a little noisy with the rusted out exhaust but it was a runner.

Once again you look at these projects and think that won’t take much to sort out!

So it was stripped down, the frame powder coated, the engine and gear box stripped down, new bearings, bush’s fitted, the barrel had a crack in the base, this was welded and the hole barrel honed, a new piston was fitted, this was from a Triumph Daytona, at the time I could not get an original piston and I was told by a fellow Velocette owner that his bike had one fitted and worked well. The rear bearing alloy end plate of the dynamo had disintegrated so I found another expert at work who machined and welded a replacement end plate. He also made a new gear foot change arm from a piece of an office chair, and welded up the gaping hole in the petrol tank. I managed to make a new set of handle bars from stainless steel tube and the company’s hydraulic bender, a tool was made to dismantle the Dowty front forks and examine all the seals inside, new bronze bushes were made for the chrome sliders, yes by another expert on a lathe.  (We did manage to get our proper work done!)

Yet another expert made up new sections of mudguards and welded them in, getting them back to shape.

The wheels were sent off to be rebuilt, there was a choice of Italian chrome or British chrome rims, I chose the British, the spokes are stainless and the tyres are Avon Road Runner to the original pattern.

I started to do the paint work on the tin ware myself, but after a couple of disasters with the primers and undercoats reacting I decided to pay a man to do it, he also fitted the transfers and lacquered them at the same time as the paint.

All this work in a few lines, it does not sound much, but as you know those that have done a rebuild it takes time. Don’t add up the cost, if I was doing it for a living I would have been bankrupt years ago!  The rebuild is still ongoing.

November 2014:
Undertaking a chassis refurbishment of the TVR as the original powder coating is flaking off. This is a class problem with the late 90’s TVR's due to the fact that the factory started to do the powder coating themselves, whereas prior to this the process was subcontracted out to a specialist. Next steps are to strip the chassis and get it shot blasted, hot zinc sprayed then powder coated.

April 2015.
The chassis work is completed and after a partial recondition of the engine it was mated with the gearbox and installed in the chassis.The body engine bay was also smartened up with new heatshields and some fresh paint. The pictures show the body hoisted and the rolling chassis wheeled underneath. The body was lowered and bolted on with no issues. One week later after installing and connecting all the ancillaries, the battery was installed and the engine started and ran with good oil pressure and no real problems. The engine has now bedded in and the adjustable front and rear suspension has been set up by a specialist. The car is running well. Overall a very pleasing result. The time taken for the project was 535 hours over a period of 134 days. 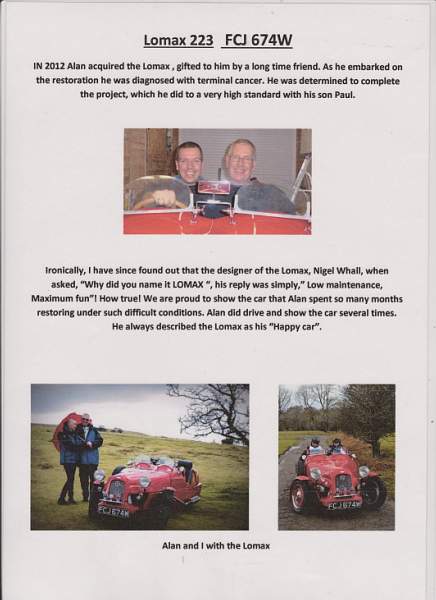 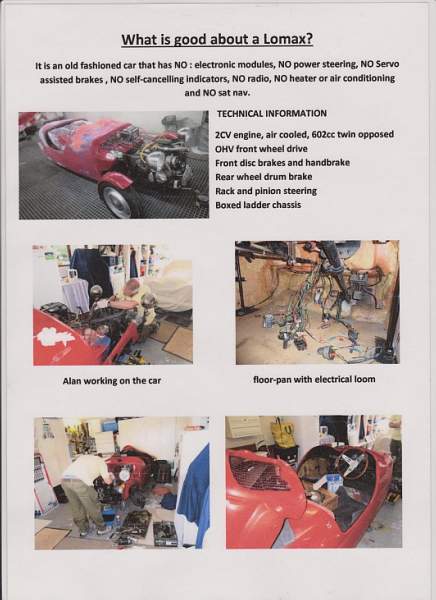 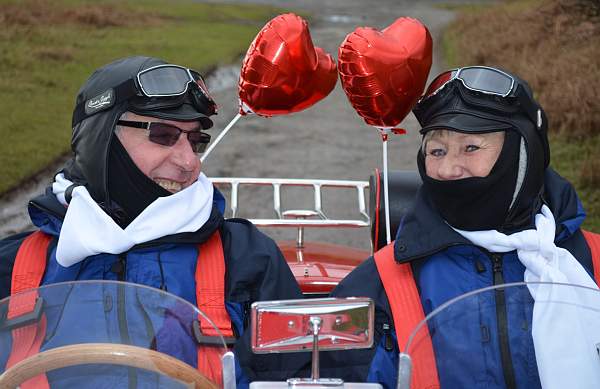